The French revolution of 1789 was seen to follow on and extend the promise of the American revolution. It was far more radical and saw the more direct involvement of the popular masses.

Wolfe Tone described how “the French Revolution became the test of every man’s political creed, and the nation was fairly divided into two great parties – the aristocracy and democrats”.
For the Northern Presbyterian radicals France offered hope of change at home.
France was not just seen as a refuge but also as an example that in the words of the paper of the United Irishmen, Northern Star, proved to the “people of every country … that when they are oppressed, they have the power to redress”.

The Rights of Man 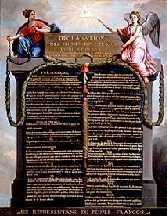 The identification with American or France was through sympathy with the political demands/program of those revolutions.
The high demand for political literature and papers that was evident throughout the 1790’s indicates the influence of revolutionary ideas.
First amongst these was a two part pamphlet called ‘The Rights of Man’ written by Thomas Paine.

This pamphlet, starting as a defence of the French Revolution, argued that hereditary monarchy was unnatural and advocated a republican form of government.
It was published in March 13, 1791 and by July of 1791 the Dublin Whig club had already published a cheap edition for mass circulation.
By late 1793 over 200,000 copies of parts one and two had been circulated in Britain and Ireland.

Paine’s prosecution for seditious libel by the British government only boosted its popularity and one United Irishman, Leonard McNally writing in 1795 described how “His works are in every ones hands and in every one’s mouths. They have got into the schools and are the constant subjects of conversation with the youth”.

The political context in Ireland

Ireland of the 1790’s was ruled by Anglican (Church of Ireland) landowners and aristocrats.
The mass of the population were not Anglican and so even if they could accumulate wealth they were excluded from political power.
Outside of Ulster and Dublin they were overwhelmingly Catholic.

Ulster was dominated by Presbyterians (Dissenters) who had moved there in the previous centuries, displacing the earlier Catholic settlers of that region.

The complex religious divide along class and geographic lines had been created by the British ruling class as a mechanism to ‘divide and rule’. It included a codified system of religious discrimination known as the Penal Laws.

The Penal Laws were designed to draw a religious barrier between the landlord class (which would be restricted to Anglicans) and the Catholic / Presbyterian peasantry.
Catholic landlords could retain their land but only at the price of converting.
Between 1703 and 1788 some 5,000 Catholic landowning families became Anglicans.

In addition by becoming agents for absentee landlords many of the Catholic gentry went underground.
It’s calculated that “If one includes ‘convert’ estates, the figures for ‘Catholic’ ownership of land reaches about 20%”.

In addition to breaking up Catholic owned estates the Penal Laws also ruled that “No prelate was allowed to reside in Ireland under a penalty of being hanged, drawn and quartered. … No Catholic could serve in the armed forces or possess arms… nor ride a horse worth more than £5. They could not vote or be members of parliament or citizens of an incorporated town”.
In short even if Catholics could acquire wealth they were still excluded from any participation in decision making.

Foundation of the Society of United Irishmen

The foundation of the Belfast and Dublin societies of United Irishmen took place in the Autumn of 1791.
They appealed not just to Catholics, but to Protestant men as well. The most famous of the Irish men was Theobald Wolfe Tone.
This initially reformist organisation demanded democratic reforms including Catholic emancipation.
In response to popular pressure the British government which effectively ruled Ireland initally granted some reforms.
This period of reform ended in 1793 when war broke out between revolutionary France and Britain.
The United Irishmen’s journey to revolutionary separatism was only completed with the Cave Hill oath of June 1795.
From this time on their program was for a revolution that with French backing would break the connection with Britain and usher in democratic reform.

In December of 1796 the United Irishmen came the nearest they would to victory when 15,000 French troops arrived off Bantry Bay.
Only the bad weather and poor seamanship of the Jacobean sailors prevented the landing and saved Britain from defeat.
After Bantry Bay Irish society was bitterly polarised as loyalists flocked to join the British army and the United Irishmen’s numbers swelled massively.

By the Spring of 1798 a campaign of British terror was destroying the United Irishmen organisation and many of the leaders had been arrested.

The remaining leaders felt forced to call an immediate rising, before French aid would arrive.
The date was set for May 23rd. A series of factors undermined the rising in Dublin.
However it sparked major risings in Wexford in the south and Antrim and Down in the North.
These saw large scale battles in which tens of thousands participated.

Wolfe Tone and the French support 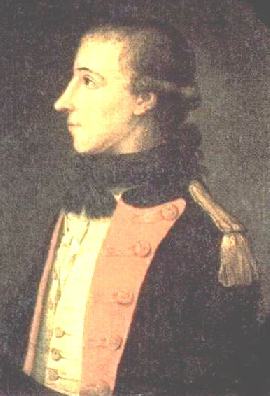 When war was declared between France and England in 1793, the United Irishmen were suspected of being in league with the French.

Tone fled with his family to America. From there he sailed for France in 1796. In Paris he pleaded Ireland’s cause with the French, urging them to send an invasion fleet to Ireland.

This ill fated fleet under Hoche, with Tone aboard along with 15,000 men, was scattered and unable to effect a landing in December 1796 in Bantry Bay.

Tone then managed to persuade the French to send a further expedition under General Humbert with 1,000 men.