The French expedition to Ireland

There were also a number of Irish among Humbert’s command. These included Bartholomew Teeling and Fr. Henry O Kane.

This tiny force, together with its Irish allies, was to conduct an extraordinary campaign that shook the British Empire.

During 16 days they sailed taking a circuitous route to avoid detection by the British navy.
The mission of this little French expeditionary force was to provide military assistance to the Irish rebels of the “Rising of ’98” – sometimes referred to as “Bliadhan na bhFrancach” or “The Year of the French” – in their attempt to free Ireland from English domination.

The fleet had originally planned to land in Co. Donegal, but due to storm and no doubt influenced by the presence of Fr. O Kane who was a native of Killala the fleet sailed into Killala Bay.

On the 22nd of August, 1798, the three frigates landed at Kilcummin flying the English colours.

Edwin and Arthur Stock, sons of the Protestant Bishop of Killala, who had sailed out to meet them, greeted them. The two were captured, the English flag taken down and the French flag hoisted.

One of the first to disembark was Fr. O Kane who spoke to the locals in Irish which was the native tongue of most of the Irish at that time.
Word soon filtered to native Irish throughout Mayo and Sligo.
Bishop Stock also heard of the arrival and he sent messages to the local gentry among them the Jacksons, the Knoxs, Binghams, Palmers and Kirkwoods. Into the relative quiescence of northwest Ireland, the French expeditionary force fell like a thunderbolt.
By about 7pm the landing was complete. 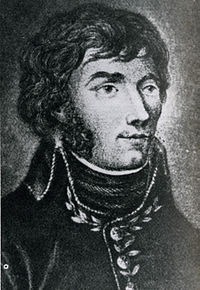 (the landing occurred on his 31st birthday), a canny veteran of irregular warfare against the insurgents of the Vendée, was well aware of the odds against him in a conventional military showdown, but also of the multiplying effects of surprise and speed.
He was also keenly aware of the importance of early victory for exciting the morale of the Irish insurgents and dismaying the ill-trained loyalist militia.

Killala, viewed from the north

The first military confrontation occurred on the afternoon of 22 August, when Colonel Jean Sarrazin led a group of French Grenadiers south to the nearby village of Killala.
The garrison of 200 men included a handful of regulars of the 17th Foot (Leicestershire Regiment), but was mostly composed of the Yeomanry, an ill-trained part-time paramilitary constabulary.

With a portion of Sarrazin’s force circling around the British left flank and the remainder pressing a frontal attack with the bayonet, the unnerved Loyalists fired one ragged volley and then fled in terror towards Ballina.
Three Frenchmen were slightly wounded, bishop Stock’s palace was taken over as Humbert’s H.Q. and several of the yeomen were taken prisoner.

A French soldier then climbed to the top of the palace and removed the British flag, which was replaced by a green and gold flag bearing the inscription ‘Erin Go Bragh’ (Ireland forever).

“After several unsuccessful attempts behold at last Frenchmen arrived amongst you . . .

“Brave Irishmen, our cause is common. Like you we hold as indefeasible the right of all nations to liberty. Like you we are persuaded that the peace of the world shall ever be troubled as long as the British ministry is suffered to make with impunity a traffic of the industry and blood of the people . . .
“Union, Liberty, the Irish Republic! Such is our shout. Let us march. Our hearts are devoted to you; our glory is in your happiness.”